Being a Ham Radio Operator is a dream come true. I was interested in getting my license when I was still in the Air Force. My first taste of Ham Radio was in the Philippines. I went to the MARS station on base and saw what they did. From that time on I was hooked. I wanted to be a Ham Radio operator.

I learned the morse code at least 6 times. Being in the Military and overseas I could not find any place to get tested so I never got a license.

In the early 1960's I got my first CB radio. I met a lot of people that way. I was in and out of the States and when I was overseas I couldn't use the CB. When I came back to the States and retired from the Air Force I got back into the CB radio. I spent some time with the CB crowd until I couldn't take the language any more.

In late 2007 I thought about getting back into CB until I remembered how it was and why I quit using it. I thought about getting into Ham Radio. I knew that I could get a waiver from the code because of my bad hearing. After looking around for a place to do the testing I found out that I could get the testing done in Madison, Wisconsin and that they removed the requirement for the code. That was all it took. I got the books for Tech and General, studied and when the local group held a class for Tech the end of February 2008 I went to it and tested. After I passed the Tech I tested and passed the General so here I am with a General Class license. In February 2012 I took the test for Extra and passed that.

As soon as I could get on the internet I ordered me my second radio. I already went out and got a handheld 2 meter / 440 meter radio. I put up a 20 and 17 meter wire dipole and I was on the air ready to make my first contact. Contact number 1 was on March 6, 2008 to KB5YQ in Texas on 20 meter phone. You have to look at my "Contact and QSO Information" page for my latest contacts and my "My Ham Shack" page for the latest in my equipment. I think I have learned that this hobby is very costly or just a few dollars depending on what you want. If you hear me on the air give me a holler. I like to have a conversation with my contacts not just the call sign and RST's. To me that isn't fun. 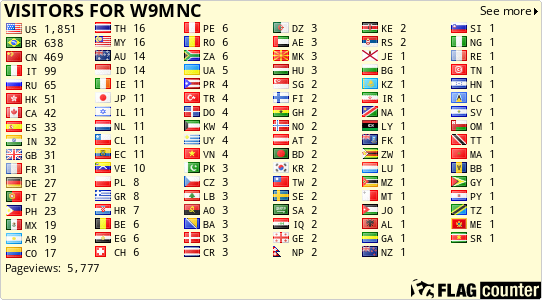